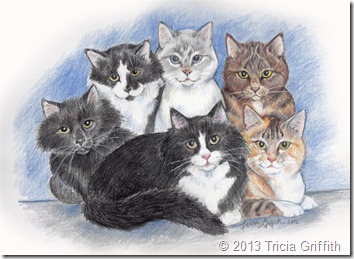 I confess to procrastinating a bit on starting this portrait. Not only was it six cats, but it was from some rather low quality photographs. This kitty family lives in a different state, so it was not really an option to go take some better photos. It is also a bit daunting to figure out how to PUT six cats into a portrait and not have it look like a class yearbook.

I solved part of the problem with the photos by experimenting with scanning them. I scanned them at a really high DPI (we’re talking 1200 DPI!). It made a HUGE file, but with that, I was able to enlarge the images, crop them down to just the cat and adjust them a little bit in Photoshop. They were still pretty grainy, but at least a little bit easier to see their markings.

Next, I used my friend Google Search to find cats that looked similar to these kitties. Long haired tuxedo cat, calico cat, lynx point Siamese, and a few other search terms entered into Google Images helped me find cats with similar markings. Then I used those images to help me get more of the technical details like facial structure, eyes and that sort of thing that just weren’t clear on the photos.

To decide how to place them on the paper, I basically just did a rough sketch on scrap paper and decided how to place them. It was partly influenced by how the cats were positioned on the photographs, as far as how they were sitting and what direction they were facing.

I used pencil to sketch in the basic outlines and markings, and then used colored pencil to put in the colors. When coloring animals, I vary the process depending on the colors. Black animals, I start by lightly filling in the shapes of the darkest black areas, then I slowly build up and fill in, the highlights of their fur essentially being the last thing I fill in. Animals with browns and other colors, I tend to start with the lightest colors first. So, golds and light browns go down first, followed by layers of darker colors. With luck, this captures the appearance of a lighter colored undercoat that these animals tend to have.

Overall I am fairly happy with the final result. I tend to get what I feel is a bit too heavy handed with colored pencil and the final look is not as realistic as I like, but I like how the coloring of the fur comes out. I feel like I am able to retain a bit more realism when I do portraits only with graphite. Watch for future works while I experiment with how the colored pencil animal drawings might look more realistic.

This site uses Akismet to reduce spam. Learn how your comment data is processed.