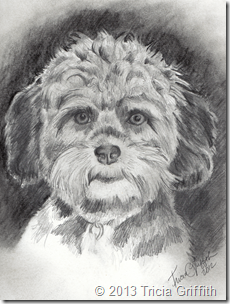 I actually completed this portrait shortly before Christmas, but since it was a gift, I held off posting it until I knew the recipient had it! I had the joy of a wonderfully clear, large digital photo to work from for this portrait, so I didn’t have a lot of the preparation work that I did with the six kitties portrait.

The medium for this drawing is primarily graphite. I wanted to make sure that I didn’t get too heavy handed with Bella’s portrait, because this actually the first time I’d drawn a pet with such a cute little curly mop of hair on her head, and I admit that I saved it until last, being a chicken. Bella’s colors in real life are kind of a neat silvery/chocolate color that probably has a name, but escapes me at the moment. I felt that it lent itself well to the graphite medium.

This is a bit heavier than some of my pencil drawings, but I think it’s because I was being a bit bolder than I usually am. My pencil works tend to be fairly conservative, so this was really sort of an interesting mix between my colored pencil style and my graphite style.

The good news is, the gift recipient was happy, so I’m happy!

This site uses Akismet to reduce spam. Learn how your comment data is processed.